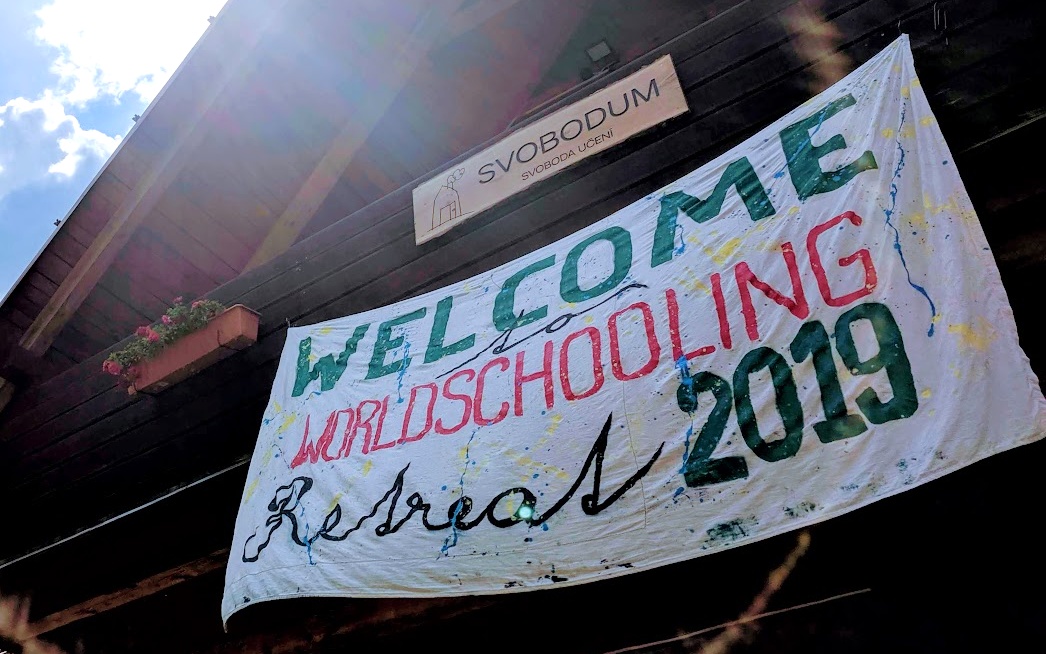 New and old friends, play, inspiration, talks and workshops. Busy days with room for relaxation. Little adventures and luck in the misfortune. Community, recognition, initiative and new opportunities. This is the worldschooling retreat 2019 in the Czech Republic. Welcome to our story about it.

Short about the retreat and Svoboda učení

I have previously written about the winter visit to the Czech unschooling organization Svoboda Učení and their unschooling-farm “Svobodum“. Svoboda uceni is an organization run by unschoolers for unschoolers here in the Czech Republic. They are located all over the country and organize various events, they often participate in Czech media and arrange retreats like this one. Svoboda means freedom and Učení means learning. You can see their manifesto here.

The Worldschooling retreat is the first public international event held here. 95 people from different countries participated fully or partly during the 9 days of the retreat. There were different kinds of accommodation options such as accommodation in the main building, in the bungalow, in the guest house next doors or camping.

The schedule was partly arranged in advance with plenty of room for spontaneous activities. It is best to adapt to the group when you know what the group is like because you dont know in advance how the group dynamics will be. An example of a daily programme:

Child care was offered by Katka who played and organised some craft projects with the children at the speeches and workshops. Many different types of families participated in the camp. Both families that were interested in worldschooling and families that were already doing it. There were children of all ages from 0-20 approximately. The participants had different kinds of lifestyles, but the common denominators were probably the family values, the environment, health and a life without the state’s involvement in the children’s education. Both organizers and participants offered activities that were voluntary to participate in.

The movie Self taught

The film director, Jeremy Stuart, who makes home schooling and self-directed filming, had just released the movie „Self taught“ that tells the stories of grown up unschoolers and self directed learners. It is extremely inspiring to see what the results can be like and a good way to portrait self-directed learning for those that are not so familiar with it. I wish that all teachers and politicians in Sweden would see the film.

The Unschooling farm Svobodum is just a few kilometers away from the Polish border. The area is mountaneous and there is a ski resort just 15 minutes away. And so much beautiful nature. In the small village Wolimierz there is a place in the nature where festivals are held every now and again. It’s family friendly. The playgrounds are mostly made of wood by hand and painted in imaginative colors and patterns.

During the same weekend as the worldschooling retreat the hippie festival „La Consciencia colectiva“ (The Collective Consciousness) was held. The retreat organizers suggested a collaboration so that we, the volunteers and some participants, arranged a discussion workshop for the curious festival attendees. We sat in a ring in a dark room with candles in the middle. All worldschoolers who wanted to attend told their stories and answered questions. Participants were not entirely unfamiliar with unschooling and worldschooling which was nice.

“Skanzen Museum” and a democratic school

There are about 15 unschooled children in the village that attend the democratic school here 3 days per week. It is not a „real“ school but a kind of association for home-schooling families. The children can spend time here with each other and participate in activities. It is also an open-air museum with traditional buildings where old skills are applied. The family that runs Skanzen has renovated and arranged the land completely by themselves.

They have dug lakes, ponds, and led their drinking water from a natural spring 300 meters away. There are, among other things, permaculture, an old-fashioned mill, solar panel kitchens, a black smith workshop and a pottery workshop. During the visit we tried out different activities such as horse riding, forging in the black smiths workshop, archery and ceramics.

An unexpected find on a mushroom hunt

There were about 10-15 families that wanted to come along and pick mushrooms. We were a small caravan of cars that went towards the deepest nearest forest a short drive away. Once there, the children and I found no edible mushrooms but we saw poisonous and disgusting fungi such as Stink horn, Phallus Impudicus. We saw a slow worm – a kind of legless lizard and wild boar poop. Our tongues and fingers were all purple from all blueberries that we ate on the way to the mushrooms we were going to pick. When it was almost time to leave the forest me, Winston and Edward walked away from the others.

We found a lethal white fly agaric and talked about it. Then we saw more white among the moss and the blueberry plants. I thought there were more fly agarics. But on closer inspection we saw this:

A blessing in disguise with joint worldschooler efforts

Early in the morning (for us 8 am is very early) I decided that we should go to Lidl in the nearby town of Frydlant to buy some breakfast items as we were running low. Henry and Edward came with me. On the way back I heard strange sounds from the wheel and stopped a couple of hundred meters  away from Lidl. Puncture! Alone and inexperienced with this with a 7 year old and a crying 1 year old (a careless lady in Lidl had crashed into him accidently with the shopping trolley) . I nursed him on the pavement until he became calm enough and started looking for the spare wheel. It was an art to move the items in the car booth and open the extra place for the spare wheel while carrying Edward on my hip.

A friend that had also shopped on Lidl came by to assist first. There were no tools in the car to remove the wheel. A second family came by but they had no tools either in their car. The tire workshop, which was 200 meters away, had closed for summer holidays. Some more trying and we decided it was time to go back. The kubb game was so delayed it had to be postponed, as the kubb was in the first familys car. Then a third family turned up with a 4th persons tools. Which broke! But family number 3 stayed there and helped while I went back and switched with my husband so the kids could come back to the retreat. After 6 hours the car was finally fixed and had new tires. Thanks to joint forces from the worldschoolers we were able to solve the problem and this adventure became a small anecdote in itself.

Final thoughts on the retreat

I just knew a few of the participants from before, mainly friends and some core members of the Czech unschooling organization. A little more than half of the participants were Czech families. There were 3 families from Sweden, some from Germany, Luxembourg, Slovakia, USA and Poland. It was fun to get to know so many new families at the camp and get invitations, and also be able to invite back. It has been good, and more good will come out of this I think.

I gave a small talk about the situation in Sweden – why we had to leave and how we made our disadvantage an advantage. It felt good to have told the participants about it. I think there was a special respect for the situation for Swedish homeschooling families in exile as the Czech families have already experienced communism and could see some similarities.

Next year, this fantastic worldschooling camp will be held again so please note July 17-26 in your calendar. We plan to be there of course!